In the second part to 'Life Sciences issues in corporate transactions', published in the January edition of Synapse, Colin McCall discusses the development cycle and the patent cliff and other matters important to the life science sector, including biosimilars, orphan medicines, parallel imports and compulsory licences.

The development cycle and the patent cliff

Intellectual property protection is vital to maximising the benefit of R&D in the life sciences. Technological improvements, especially when embodied in commercial products, tend to be fairly transparent and therefore available to potential competitors. Such competitors can therefore acquire knowledge about new medicinal products within a reasonably short period of time and with a relatively modest R&D effort of their own.

In order to understand the benefit of IP protection and the effect of the ‘patent cliff’, an understanding of the development cycle of a successful medicinal product is important. Early phases in the development cycle, such as discovery and preclinical and clinical phases are typically characterised by initially low but rapidly increasing improvements in the medicinal product (eg, preferred formulations, efficient manufacturing processes, new indications, dosing regimen, etc) as development issues are ironed out, but accompanied by negative total revenue given the huge costs associated with discovery and clinical development. During the intermediate phases of post-marketing approval and then peak sales improvements become increasingly hard to achieve but revenues rapidly increase. In the later stages of generic competition and commoditisation little or no performance improvements are possible and revenues in respect of the product diminish.

In Figures 1 and 2 the columns each represent a phase during the development cycle: A = research (ie, discovery); B = preclinical and clinical phase; C = post-marketing approval; D = peak sales; E = generic competition/product substitution; and F = fully commoditised/obsolescence. 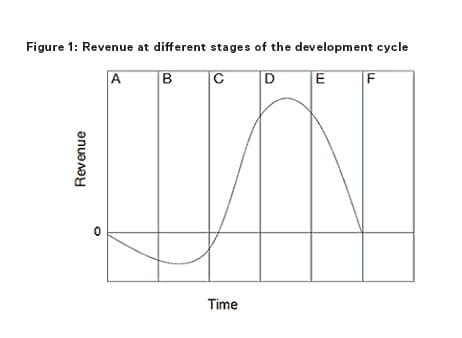 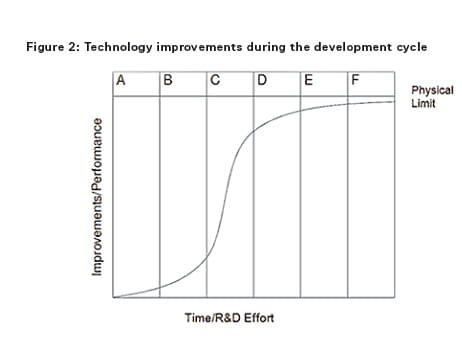 The time at which competition occurs is known as the patent cliff and will depend entirely on the strength of the IP portfolio the initial developer has managed to acquire. When the patent cliff is reached, the revenues available to all market entrants in respect of the product rapidly collapse. But it is the patent holder that loses most. By way of example, the best-selling drug in history, Pfizer's Lipitor had peak sales of around $11 billion per annum in 2009 and 2010 before going off patent in 2011. Since then Pfizer's sales of Lipitor collapsed to $2 billion for 2013. Indeed, in the last five years according to an IMS report1 the patent cliff has caused losses in revenue to innovator pharmaceutical companies of $154 billion.

The costs/revenues shown in the development cycle curve in Figure 1 represent the costs/revenues spent or achieved by all market entrants in respect of a given medicinal product as a whole and not just the costs/revenue of the first life sciences company to develop the new medicinal product. It will be the first developer that incurs almost all of the cost and derives almost all of the revenue up until the patent cliff. Thereafter, the revenues are shared by all market entrants.

Other matters of importance in the life science sector

Improvements in technology and pressures to diversify business models away from small molecule drugs are just two of the factors that are focusing attention on biological medicinal products (ie, medicinal products that are made by a living organism, such as a bacterium or yeast and can consist of relatively small molecules such as human insulin or erythropoietin, or complex molecules such as monoclonal antibodies). This has led to a rise in biosimilars.

There is no formal definition of ‘biosimilar’ in European legislation and the term biosimilar should not be confused with the terms ‘biobetter’ and ‘me-too biologic’.

Since the pharmaceutical industry has fewer incentives, under normal market conditions, in developing and marketing medicinal products intended for rare diseases that by definition will only be used to treat small numbers of patients, the EU offers a range of incentives to encourage the development of these medicinal products – known as orphan medicines.

For a medicinal product to be classed as an orphan medicine, it must be intended for the diagnosis, prevention or treatment of either:

There must also be either no satisfactory method of diagnosis, prevention or treatment of the condition concerned, or, if there is such a method, the new medicine must be of significant benefit to those affected by the condition.

The principal benefit for medicinal products designated as orphan medicines is that they benefit from more generous treatment as regards market exclusivity, namely:

Parallel importation of medicinal products in the EEA relies on the principle of patent exhaustion, which itself arises from the EU's and also the EEA's treaty commitments to the free movement of goods. These freedom of movement of goods rules as regards patented medicinal products were first established in 1974 in the case of Centrafarm BV v Sterling Drug Inc2 and dictate that when a patent/SPC holder puts (or consents to the putting of) a medicinal product on the market anywhere in the EEA, the patent/SPC holder cannot object to a purchaser of those products subsequently putting them on the market in a different EEA member state, regardless of whether such import into a subsequent EEA member state would infringe the patent/SPC holder's national patent/SPC rights in the member state of destination. As a result of the differences in prices set by national governments and also by the patent/SPC owners themselves in the various different EEA states there is now a significant volume of parallel import activity.

The similarity between two medicinal products is considered to be sufficient when the two products have been manufactured according to the same formulation, using the same active ingredient, and have the same therapeutic effects. A parallel imported medicinal product can also be distributed under the simplified procedure even if the similar product upon which its licence is based is no longer available on the market, provided that public health requirements are met.

Repackaging will be necessary if the packaging sizes in use in the member state of origin are not permitted in the member state of destination. In principle, however, this is precluded by the trademark right of the manufacturer since all changes to the packaging or the product itself will constitute an infringement of the manufacturer's trademark. But this rule conflicts with the principle of the free movement of goods within the EEA. The case of Bristol-Myers Squibb3 has therefore ruled that certain necessary and appropriate changes are permitted, if they are made in order to eliminate obstacles in the distribution process. The so-called BMS Conditions are:

The repackaging must be necessary, and not just motivated by commercial interests. For example, repackaging is not justified for a parallel imported product that may be put on sale in the member state of destination simply by changing the labelling of the outer packaging (eg, language matters).

The availability of compulsory licences in respect of patents, especially in relation to pharmaceutical patents, has been the subject of considerable attention lately. This is mainly as a result of the Indian courts showing their willingness to grant compulsory licences in respect of pharmaceutical patents. In particular, the Indian courts recently granted a compulsory licence to an Indian generic pharmaceutical company under Bayer’s patent for its cancer drug Nexavar, determining that in essence Bayer’s price for Nexavar was too high. This, together with Bayer’s failed challenge that India’s patent legislation under which the compulsory licence was granted was not compliant with the Agreement on Trade-Related Aspects of Intellectual Property Rights (the TRIPS agreement puts restrictions on the ability of World Trade Organization members (of which India is one) to restrict the exclusive rights of patentees through – among other things – compulsory licences), has led to significant media interest in the power under national patent legislation to grant compulsory patent licences.

Article 31 of the TRIPS agreement provides that where patent legislation of World Trade Organization member states allows compulsory licences to be granted the following provisions must be included:

This article is an extract from the Life Sciences chapter of Intellectual Property Issues in Corporate Transactions, published by Globe Law and Business, December 2015.

If you have any questions on this article or would like to propose a subject to be addressed by Synapse please contact us.

Licensing out: Try not to get benched