Nullity proceedings in the UPC system

In addition, unless an action has already been brought before the UPC, during said seven-year transitional period the proprietor of or applicant for an EP granted or applied for prior to the end of the transitional period, as well as a holder of an SPC based on an EP, can opt out this EP and respective SPCs from the exclusive competence of the UPC.

Where to bring revocation actions

Against whom shall the action be brought

The action for revocation has to be directed against the proprietor of the patent (Rule 42.1 RoP). A counterclaim for revocation is therefore not possible in an infringement action brought by a licensee (Art. 47.5 UPCA).

Course of the proceedings

The proceedings before the UPC in first instance consist of three stages: written, interim and oral procedure.

During the written procedure, the pleadings are exchanged. After the Statement for revocation is lodged, which amongst others has to contain the requests, the grounds for revocation as well as the evidence relied on (Rule 44 RoP), the defendant has one month to lodge a Preliminary objection concerning the jurisdiction and competence of the UPC, the competence of the division and the language of the Statement of claim (Rule 19 RoP), which in general follows the language of the patent (Rule 45 RoP).

In general, independently from the Preliminary objection, defendant has to file the Defence to revocation within two months of service of the Statement for revocation (Rule 49.1 RoP), including – if relevant – an Application to amend the patent and a Counterclaim for infringement (Rule 49.2, 50.2, 50.3 RoP).

The defendant has another month from the service of the Reply to answer in his Rejoinder to the Reply the matters raised in the Reply including issues on the Counterclaim for infringement and on the Application to amend the patent (Rule 52, 56.3 RoP).

Finally, the claimant has one month from the service of the defendant’s Rejoinder to lodge a Rejoinder with regard to Counterclaim issues as well as arguments regarding the Application to amend the patent raised in the defendant’s Rejoinder (Rule 56.4 RoP). After that, the written procedure is closed (Rules 58, 35 RoP). Further written pleadings may only be exchanged with the consent of the judge-rapporteur (Rules 58, 36 RoP).

This regime also applies for the invalidity arguments in case a counterclaim for revocation is filed. 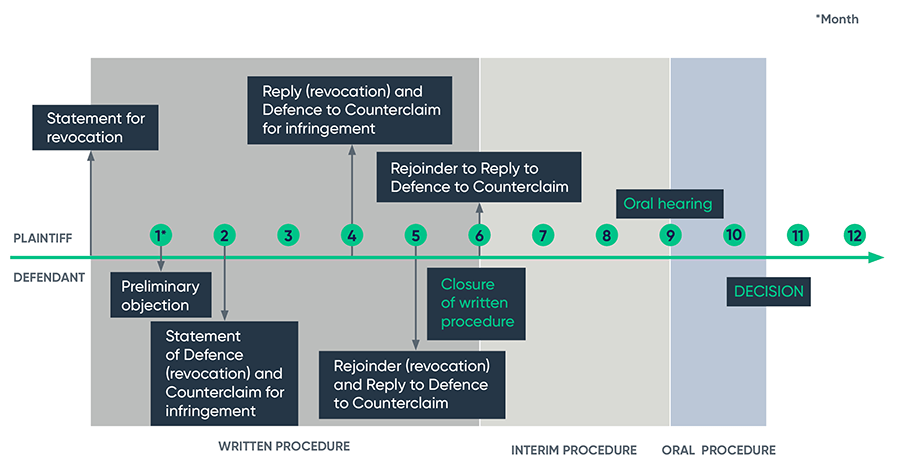 Thus, according to the Rules of Procedure, there are only about nine months between the filing of the lawsuit and the oral hearing. A judgment should be available after around ten and a half months.

The UPC bases its decision on Union law, the UPCA, the EPC, other international agreements applicable to patents and binding on all Contracting Member States and national law. The substantive law defining reasons for invalidity is therefore mainly found in the EPC. Accordingly, the main grounds for invalidity are lack of novelty, lack of inventive step, insufficiency of disclosure, added matter as well as lack of patentability and unlawful withdrawal.

Court fees for a revocation action before the UPC according to the current proposal for the fee schedule amount to 20k EUR (fixed fee). For a counterclaim for revocation, the fee is the same as for the infringement action subject to a fee limit of 20k EUR. The maximum limits for recoverable lawyers' fees lie between up to 38k EUR (value in dispute up to 250k EUR) and up to 2 Mio. EUR (value in dispute more than 50mio. EUR).

The UPC's tight deadline regime in invalidity proceedings is likely to be challenging for both future invalidity plaintiffs and defendants. In addition, it remains to be seen how the UPC will interpret the grounds for invalidity of the EPC, to what extent it will follow the standard of the EPO and what significance the fact will have that judges from the entire UPCA territory from different jurisdictions and with a correspondingly different understanding of the law will have to create a uniform case law before the UPC. Compared to for instance nullity proceedings before the German Federal Patent Court, it is to be expected that nullity plaintiffs will have to overcome higher hurdles than before in order to argue lack of inventive step, should the UPC adopt the problem-solution approach and the could-would approach of the EPO. Courts in the Netherlands and Belgium on the other hand already apply EPO case law in this context: should the UPC adopt a similar route, national case law of such jurisdictions may provide some insight on how the UPC may decide.

The UPC judges: who are they and why does it matter?