Following on from the temporary and now permanent ban on the promotion of speculative illiquid securities to retail investors, the FCA is planning to consult again on further measures aimed at reducing the harm to consumers caused by investing in "inappropriate high-risk investments". The FCA define "inappropriate high-risk investments" as any investment to which marketing restrictions apply, which captures all wholesale and some retail issuances of debt.

What are the "high-risk investments" that the FCA is referring to?

On 29 April 2021, the FCA issued a Discussion Paper aimed at taking a market sounding on its various proposals to strengthen its financial promotion rules, with its ultimate aim being to "…deliver a consumer investment market that works well for the millions of people who stand to benefit from it".

The current categories of high-risk investments are summarised in the diagram below.

Areas where FCA rules could be strengthened

The FCA's latest suggestions include:

The suggestions are summarised in the following diagram. 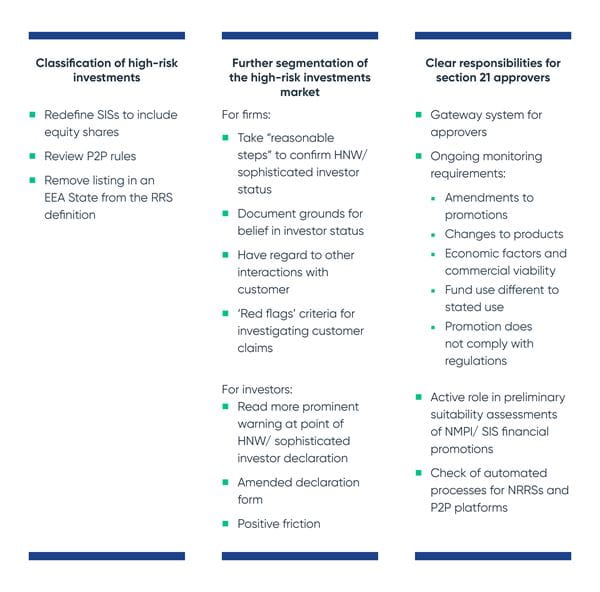 What does this mean?

Issuers and promoters should take note that this issue remains firmly on the FCA's radar and that further requirements in respect of the protection of consumers seem inevitable.

It is not yet clear who will likely be charged with providing the educational videos and administering the online tests, and we expect the FCA to clarify this in its final policy proposals.

The proposed requirement that promoters should have an ongoing oversight for the accuracy of a financial promotion would be a significant increase in their scope of work and potential liability. Promoters should keenly watch the developments on this point as it may require them to operate and engage with issuers on a vastly different basis.

On 19 April 2021 HM Treasury released a consultation paper on non-transferable debt securities ("mini-bonds"), following the failure of London Capital & Finance in 2019.  HMT has proposed either making the issuance of mini-bonds a regulated activity or extending the scope of the Prospectus Regulation to cover them.  The consultation clearly raises issues which are relevant to the FCA's Discussion Paper.  It closes on 12 July 2021.

Responses to the Discussion Paper can be made on the FCA's website until 1 July 2021.  The FCA will consider these responses and is planning to undertake testing of ideas informed by behavioural research.   We can expect the FCA to release a consultation paper on its proposed changes later in the year.

How can we help you?

Taylor Wessing have significant experience in acting for issuers, promoters, trustees and other services providers on both wholesale and retail issuances of debt securities and will report later in the year on any new policy proposals.