In 2013, a global effort to reform interest rate benchmarks was launched to render these benchmarks less prone to manipulation and to make them more representative of the wider market conditions.

In the EU, this global effort manifested itself as the EU Benchmark Rate Regulation – Regulation (EU) 2016/2011 (BMR), which came into force on June 2016, and became applicable as of January 2018. BMR regulates indices used as benchmarks in financial instruments and financial contracts, as well as indices measuring the performance of investment funds.

In the Eurozone, EURIBOR has traditionally been the main benchmark rate in terms of number of contracts and is widely used in retail loans and hedging products. EONIA (the Euro Overnight Index Average) is the next most important benchmark and has been the preferred overnight rate of all overnight unsecured lending transactions. EURO LIBOR is also used but on a smaller scale.

The first step in the global benchmark reform has been the development of so-called risk-free rates (RFRs). The table below shows the main RFRs for multiple global currencies. In the Eurozone, the overnight Euro Short-Term Rate (€STR) – which is administered by the European Central Bank (ECB) and was first officially published on 2 October 2019 – is to become the standard RFR.

The table below summarises the key points about major benchmarks currently in use in the Eurozone. More specifically, it outlines how these benchmarks are calculated and whether they will become obsolete.

€STR is set to replace the EONIA by the end of 2021. In preparation for this, the calculation method of EONIA was reformed. Indeed, on the date €STR was first officially published, the European Money Markets Institute published a revised EONIA, transitioning this index from being based on transaction-based submissions by panel banks to being pegged to €STR with a fix spread of 8.5 basis points. This spread was calculated by the ECB on 31 May 2019 and reflects the historical difference between the two benchmarks.

EURIBOR has been satisfactorily reformed by including transaction data as well as expert judgements, and thus can continue to be used for the time being. Despite this, fallback provisions should be incorporated into loan agreements to ensure against EURIBOR’s possible future permanent discontinuation.

EURO LIBOR is the least used of the LIBOR currencies and its usage is significantly lower than that of EURIBOR. On July 2017, the UK’s Financial Conduct Authority announced that market participants should not expect LIBOR to remain available post 2021. This discontinuity will inevitably mean that EURO LIBOR will also need to be replaced with €STR by the end of 2021. 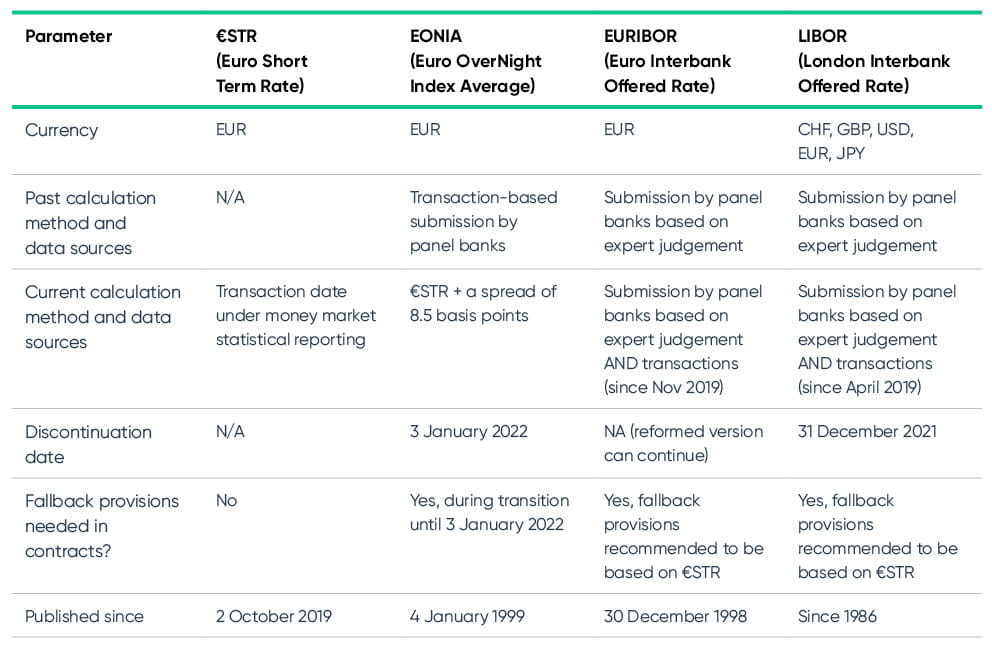 Transition towards €STR in Germany

EONIA-referencing contracts will need to be amended in Germany in preparation for the transition to €STR. Among other financial contracts, these amendments need to be made to the German master agreements for financial transactions (Deutsche Rahmenverträge für Finanzgeschäfte) and their addenda which can be considered as the German law equivalent of the ISDA Master Agreement.

On 18 June 2020, the German Banking Association (Bankenverband) published a template supplemental agreement for the transition from EONIA to €STR. The template is designed to cover the German Master Agreements for Financial Derivatives Transactions, for Securities Lending, and for Repo Transactions.

As is usual in German Master Agreements, the template supplemental agreement is arranged in a modular fashion so that the parties can tailor the agreement by selecting which specific options are to be applied. In each part of the template, the parties can select the covered items, the covered provisions, the agreed replacement reference rates, and the transition method. This template also provides fallback provisions for the use of €STR as the replacement benchmark.

On 7 December 2020, the European Council of the EU endorsed the agreement that was reached to amend Regulations (EU) 2016/1011 and (EU) 648/2012. These amendments will enable a statutory benchmark to replace benchmarks in contracts in which there is no fallback provision or to replace a fall-back provision which is deemed unsuitable by regulators, for instance, because it could have an adverse impact on financial stability.

Finally, on 19 January 2021, the EU Commission adopted provisions to grant it powers to replace "critical" benchmarks. These critical benchmarks are those that influence a large number of financial instruments and contracts (>500 Billion Euros). They also include those that have no or few substitutes, or are third-party non-EU benchmarks whose cessation would pose a systemic risk for the financial system in the Union. Note that LIBOR will fall into the last category post Brexit.

The transition towards RFRs is well underway globally. In the EU, the introduction of the €STR on 2 Oct 2019 was the first major step. The transition from EONIA to the €STR, including the amendment of contracts referencing EONIA, needs to be completed in full by the end of 2021.

In parallel, to cover every eventuality, €STR-based fallback provisions should be included in new and legacy EURIBOR-referencing contracts even though EURIBOR has been sufficiently reformed and will continue.

To discuss the issues raised in this article in more detail, please reach out to a member of our Banking & Finance team.

Revisiting borrower defences in the hotels space – the shape of things to come?

Creditors in the spotlight – court holds the line on priorities

Why is English law the smart choice for governing smart contracts?

Why are smart contracts the smart choice for financial services?