For the very first time, after almost 50 years of negotiations and many stops and starts along the way, right holders in Europe will soon have the option to add unitary patents (UPs) to their patent portfolios and have access to a single patent litigation system covering the major part of the European market – the Unified Patent Court (UPC).

But how much will a UP cost and what are the fees for bringing an action in the UPC?

How much does a Unitary Patent cost?

The current renewal fee structure adopted by the EPO for the Unitary Patent was designed to be equivalent to the combined cost of maintaining European patent validations in Germany, the UK, France and the Netherlands – the four EU countries in which (before Italy joined the new system and the UK left) European patents were most frequently validated by patent applicants.

Under this fee structure (which was agreed in June 2015 and may be updated by the time the Unitary Patent comes into force) the renewal fee starts at €35 in the 2nd year, escalating to €1,175 in the 10th year and finally €4,855 in the 20th year. For the first ten years the costs of renewing a Unitary Patent will be €4,685 in total, while maintaining it over the full 20-year term will amount to €35,555. In comparison, the total renewal fees payable in those countries participating in the Unitary Patent (as many as 25 at the time the fee structure was agreed in June 2015) would add up to nearly €160,000 for the full 20 years.

Furthermore, please note that renewal fees can be lessened by 15% if the owner of the Unitary Patent files a statement in which he says the patent is available for licences of right with the EPO.

What does litigation under the UPC cost?

According to the current proposal for the fee schedule there are two kinds of court fees for using the UPC (in addition to lawyer’s fees, experts and other costs incurred in conducting litigation):

and, additionally, for infringement actions and declarations of non-infringement:

It was most recently proposed that the additional value-based fee would be scaled according to the value of the action, for actions valued between €500,000 and a maximum of more than €50 million. For actions valued up to and including €500,000, only the fixed fee of €11,000 would be payable for an infringement or non-infringement action.

The Administrative Committee will issue a guideline setting out general principles for the determination of the value in dispute (VID). According to the draft Guideline, the method for determining the amount in dispute in infringement proceedings should be kept as simple as possible and depend in particular on the damages to be expected. A calculation on the basis of a fictitious license fee is explicitly considered to be simpler than one based on the lost profit or the infringer's profit.

Applications to determine damages are also subject to the value-based fee in addition to a fixed fee. Furthermore, as regards appeals against final decisions of the Court of First Instance on infringement, revocation (by claim or counterclaim) and declaration of non-infringement, the fee is the same as that paid at first instance.

Fees may be reduced in certain circumstances, in particular:

A party may also apply for reimbursement of the fixed fee and reduction of the value-based fee, if that party’s “economic existence” is threatened by the payment of court fees.

A winning party may apply for recovery of court costs, to be awarded at the court’s discretion (this includes recovery of lawyer’s fees which are specifically subject to a sliding scale based on case value).

There are also tables for VID based maximum amounts of recoverable attorney’s fees, which also shall take into account reasonability criteria. The maximum limits for recoverable lawyers' fees lie between up to 38k EUR (VID up to 250k EUR) and up to 2mio EUR (VID about 50mio EUR).

These maximum limits may be increased "to a certain extent" if the complexity to a maximum amount of up to 5mio EUR for VID of about 50mio EUR.

A reduction of the costs to be reimbursed to the prevailing party, on the other hand, should be possible without a general limitation of the amount if it concerns microenterprises, small or medium-sized enterprises, non-profit organisations, universities, public research institutions or natural persons.

Renewal fees for the Unitary Patent were set at a level intended to be competitive with the costs of validating a European patent in four countries.

For businesses operating in multiple European countries that are participating in the UP, if this model is retained, it will have obvious costs benefits. For those businesses that only need patent protection in one or two countries, the advantages may be less clear.

An action in the UPC, either to enforce a patent or to revoke one, prevents the need for parallel actions between the same parties in the national courts. Consequently, the potential lawyer and court fees (which may include additional fees for a damages enquiry and/or an appeal) must be weighed against those court that might be payable in several national courts, and the costs of paying the legal teams running and managing those parallel national actions. For European patent families covering several commercially significant countries, the benefits in time and cost of enforcing and revoking in the UPC may again be clear. In other cases, the cost benefits alone may not be so obvious.

Please find below a calculation example UPC in comparison with infringement and revocation proceedings in Germany and proceedings in the Netherlands. 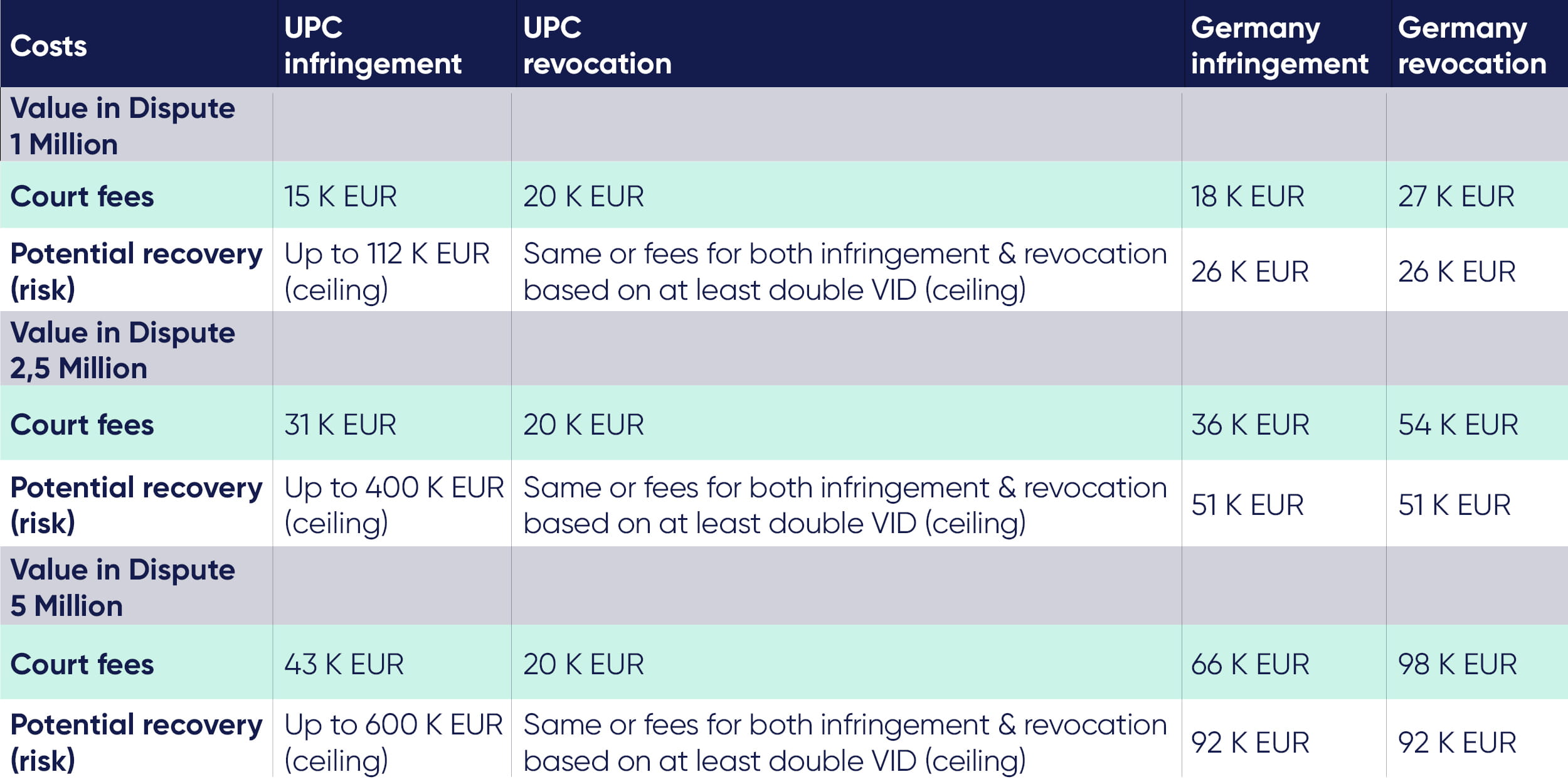 1 The Dutch classification system for reimbursement of the costs (the indicative rates), is based upon dividing the cases in different categories ranging from “simple” to “very complex”. It is expected that a procedure in the field of mechanical engineering will regularly be classified as 'normal' and a procedure in the field of pharmacy more often as 'complex'. Proceedings will qualify for the 'highly complex' category only if it involves a case that qualifies as exceptionally complex and labour-intensive (e.g., a complex telecommunications technology case with many defences, including FRAND defences). It is emphasized that the nature of the technology as such is as such is not decisive.

L'UPC avanza; brush up your Italian?

The Metaverse: legal challenges and opportunities